One Passion, One Career, One Place 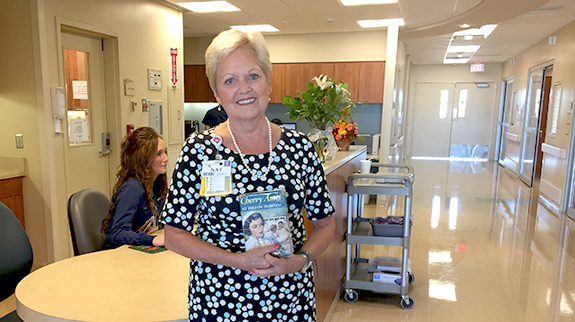 In many ways, Nat Torkelson’s, MS, RN, career in nursing has been a lifelong pursuit. In her office on the campus of Hillcrest Medical Center, where she serves as the administrative director of cardiovascular services at Oklahoma Heart Institute, a collection of neatly situated items speaks to her 45 years of service – framed degrees, employee art and a photo album of co-workers from the past she received as a gift, are among a few. Classical music plays in the background as she recalls her earliest memories playing with her sisters and neighborhood friends. Nat was always the nurse. “Every Christmas and birthday I would ask for a nurse, doctor or hospital kit,” she recalls of the play stethoscope, uniforms and medical charts that were props for her imagination. “That’s all I ever wanted to be --- a nurse.”

When Nat outgrew playing hospital, she picked up every Cherry Ames book she could find – mystery novels of a nurse and her adventures in a variety of settings, one at Hilton Hospital. By 14, Nat volunteered as a candy striper at a local hospital in her hometown of Manchester, NH, worked as a nurse’s aide weekend evenings from the age of 16 until graduating college, and moved into a charge nurse role within two months of her first RN position. Nat recognized and heeded the advice of great nurses early in her career – a career at Hillcrest Medical Center and Oklahoma Heart Institute that has given her the opportunity to be creative, lead and most importantly fulfill her life’s work of caring for people.

“No one in my family was in health care, but my mother was a ‘caregiver’ to many people,” Nat shares of what must have been her earliest influence to pursue a career in nursing. “My mother delivered meals to shut-ins, visited people in nursing homes and started an organization in my home town, in which volunteers would drive people to their medical appointments.” Her mother was also a hospital volunteer.

When Nat had the opportunity to move from a candy striper in the coffee shop to the floor as a nurses’ aide, she jumped at the chance. Patients were very ill, but that didn’t intimidate her at all. “Oh no, I was excited,” she says. “I had a big job to do.” From 3 o’clock in the afternoon until 11 o’clock weekend nights, Nat was the only nurses’ aide with an average of 30 patients. “I remember having to wash mercury thermometers, count syringes, change everyone’s draw-sheet and pillowcase and give everyone a backrub at bedtime. I was really proud of that – getting their bed nice and tight and tidy before they settled down for the night.”

She learned to dive right in and was willing to take on more than most, you could argue. And despite her years of hands-on experience and a bachelor’s in nursing from Gustavus Adolphus College in Minnesota, Nat says she knew she was very green when she accepted her first RN position at Hillcrest Medical Center after graduation. “I was very anxious,” she recalls. “There were many things I had not experienced until I started working. I wanted to start out on a general medical unit. Mary Jones, RN, director of nursing, asked me to give cardiology a try. I reluctantly said OK and here I [still] am!”

Mary was one of many leaders and experienced nurses who helped guide Nat’s career and shape her as a nurse. There was also Ruth Roberts, RN, a night supervisor. Nat remembers the kind heart behind the starched white uniform and cap. “She taught me the importance of discipline – not only constructive discipline of others but self discipline and responsibility,” she adds. “Ms. Roberts loved nursing. I remember revering her for that.” There were also words of wisdom Nat says applied throughout her career. “Nancy Mozingo, RN, head nurse on the unit where Nat began, also stressed the importance of getting to know a ‘patient’s normal’. Even if I didn’t know everything I needed to know, I could describe to the doctor what was happening that was not their norm. That was good advice.”

As much as Nat was learning how to nurse, she was learning to be a nurse – and a good one. Hospital leadership took note and within six weeks of working at Hillcrest, Nat was promoted to charge nurse of the 19-bed cardiac telemetry unit. By 1976, she was head nurse over a growing cardiac unit. Six years later, Nat enrolled in graduate school at the University of Oklahoma to pursue her masters of nursing leadership, a personal goal.

“I would work four 10-hour days as a nurse manager and then travel literally dawn to dusk on that fifth day,” she remembers. “If I had to work another day on the weekend to get caught up, I would. I did that with a lot of support from my husband.”  Nat studied at night after putting her toddler to bed. As if taking on motherhood, a full-time job and school wasn’t enough, she gave birth to her second child three weeks after graduation. “I do remember that being a very stressful time, but you get through it.” After graduation, in 1986 she moved into a director position over five units.

A lover of art and music, Nat says she has also been able to be creative as a nurse – though not in ways you may think. “We were the first to try dictation for nurses’ notes and were able to hire a part-time transcriptionist,” she adds of an initiative to help give nurses more time with patients. Another first Nat is proud of and helped lead – the first non-smoking floor at Hillcrest. “Then they asked me to chair the smoking cessation program (laughing).”

In 1990, Nat became the cardiovascular service line director. “I think along a continuum of care, so I loved this position,” she explains. “It’s really important to connect the dots and know that each one of us depends on many others to get the job done for our patients – to give them what they need.”

Seeing the big picture greatly interested Nat and an experience she says is the highlight of her career was completing a year-long cardiovascular health fellowship through Healthcare Forum in the late 1990s. “I had the privilege of being one of 30 participants (physicians, nurses and pharmacists) from all over the U.S.,” she says. With each participant leading a project with the focus of community health, Nat’s project provided education to a group of Native American female employees at Hillcrest on cardiovascular risk factors and health.

Today, Nat enjoys staying in touch with the operations and clinical side of cardiology as the director over cardiovascular diagnostic imaging services, heart failure center, cardiovascular research and data reporting, diabetes management, cardiac rehab and fitness center, weight loss program and the sleep labs. “My primary role now is to help those supervisors to be the best they can be and help them to be as engaged with their staff as I hope I have been,” she says.

Nat is, and always will be, a nurse. She shares this advice to new nurses. “Give your best to every patient,” she says. “You are given the privilege to serve people when they are in a vulnerable state. Take that privilege humbly and seriously. Love your work. Your patients will see that in you.”

[Photo above: Nat holds one of the Cherry Ames books she read growing up.]