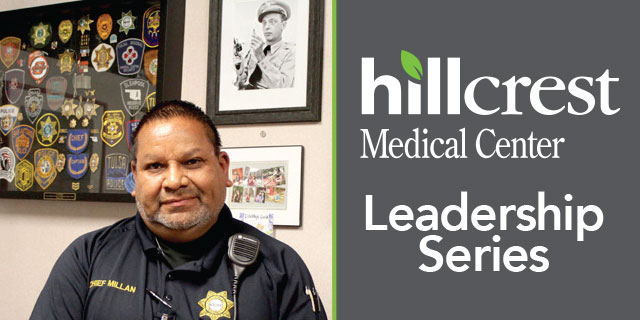 There is a difference between a response and a reaction. It is as clear of a distinction between Hillcrest Medical Center Safety and Security Director and Chief Security Officer Jesse Millan and fictional character Barney Phife, the deputy sheriff in the Andy Griffith Show whose framed photograph hangs on the wall of Jesse’s office. “It is a daily reminder of what not to be,” says Jesse of the alarmist, emotional and often inept law enforcement image Barney portrays. Responding, instead of reacting, to crisis and emergency situations is the foundation of Jesse’s 24 year career in hospital security. “I love helping people. Customer service, I personally believe, is one of my strengths. It’s not about going into situations thinking you are 10 feet tall and bullet-proof. This job is about customer service and nine out of 10 situations you can de-escalate just by talking.”

Leading a team of 26 licensed and certified security officers, Jesse reinforces this message consistently. Their training and preparation comes into play on a daily basis, as they provide 24/7 security coverage for the hospital and surrounding campus. “I pride myself on the training I uphold our department to. We’re here for crisis,” he adds. “Every day we have someone going through a crisis.”

However, that wasn’t the picture of hospital security Jesse experienced when he began working in health care at a different facility, unloading and stocking equipment in central storage. “We had no mechanical equipment at the time,” he remembers. “Every night I went home with a killer backache.” When he caught a glimpse of a security officer sitting in his car patrolling the parking lot, while reading the newspaper, Jesse thought perhaps there was an easier way to make a living. “I got in security for the wrong reasons.”

Under the leadership of professionals and mentors early in his career, Jesse quickly learned the critical role of hospital security. “Then I had the opportunity to work with Tamera Turner, the chief of security for Hillcrest Medical Center who hired me in July of 2000,” he says. “From her I learned about the professional structure of the department, security and emergency management.” From developing policies and procedures to establishing new processes, Jesse says he honed his skills under her leadership. Then five years later, Tamera retired. Jesse was ready to lead the department.

“I’m fortunate that people have seen my potential and I’ve been given opportunity after opportunity,” he says.

Today, you can’t spend too much time on campus without noticing their presence. Hillcrest security is there for patients, visitors and employees. “We’re the 9-1-1 for the facility – emergencies, disturbances and fires – no matter what happens here we take care of it,” Jesse says proudly. “Our team is CPR-trained. We’re also part of the rapid response team. We’re there if someone falls in the parking lot or walks into the lobby having a heart attack.”

Jesse sees security as an opportunity to serve and has built a rewarding career doing so. “We are compassionate customer service – a resolution,” he explains. “We are here to help you make the best of your dilemma. I’ve touched many lives and it is so rewarding to hear the outcomes when they come back and acknowledge you for helping them out and for your advice.”